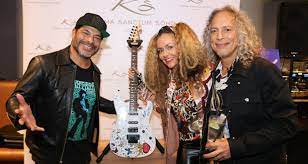 Chloe Trujillo is a Musician, Artist, Mother,  Free Creative Spirit, and The wife of Metallica's bassist, Robert Trujillo. With an impressive resume of artwork, drawings, clothing and guitar designs, you would assume Chloe would have an air about her. But she does not. Despite being surrounded by rock and roll's iconic royalty she remains humble and simply dedicated to her craft. You can feel her love for the world of art as she speaks. Truly she is extraordinarily gifted and selfless as she pours out her creative ideals onto the world.

Music is clearly another avenue to let her creativity flow. Her plan is to release a new single every month Until October when the record will be released. What a great way to introduce new listeners. Of course the fact that her husband plays in a little known band called METALLICA and offered to play on her new tracks, does not hurt either. But she told us it was no big deal asking him. They are husband and wife of course. I had the unique pleasure of chatting with Chloe about her art, inspirations, and the upcoming new album.

Tell us the writing process

Yeah it is sort of a channeling. Kind of done at the same time. When I paint I will have lyrics or melody ideas that will come at the same time. As I paint, that is my process. If I sit down to write or grab a guitar, I have images that I would paint later on.

With covid, how did you approach your writing

well when it first hit it was really interesting. no one knew what was going on. We were locked down.

I was writing a song every day. But then I stopped because I had  two hundred songs. Forced me to become more creative in new ways. I learned the new creative tools like creating artwork on the computer I just learned. So I am definitely more independent. I have crossed that thresh hold of fear. so that was good.

What is your message to aspiring artists and musicians

Its not easy. so many times I was like oh man it would be easier to get a regular job. you wont sell a painting every day. its tough. but you continue. for me the days I don't create i have a knot on my stomach. I need to create. never stop. Even in New York I had several jobs while I sang or performed or was drawing. you have to have that flame, that passion, to keep going. be strong and no matter what do it anyways.

What is next for your artistry

well I have an art show opening. I have a virtual live show in April. That is new for me. I have a single coming out every month until October. when the album is released. The music I am releasing now was written three years ago. it is a positive message. most of my songs are. I lived in New York during 9/11 and I have experienced many things. I lived a few of these large events. you question everything. like humanity, society.

I have another project that is more like a progressive metal band. It will be a small e.p. released of six or seven songs. I am recording with my old band on sunday its called 66 steps. It's a  metal, melodic band. last time we played was 2009. We might release a 66 step EP. We will see. Hopefully things open up again.

Her music, like her artwork, inspire positive frequencies in the listener and a message of good will and accelerated heart felt emotions. She takes a certain pride in her work. Schooled in the art world of Paris, France, Chloe draws inspiration from the light instead of the dark. But her passion can, as she says "be positive whether it's a death metal song or an alternative one. 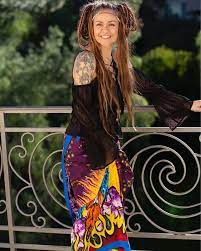 New EP will be available October 2021

Find her on Spotify, and Bandcamp