Flotsam and Jetsam Blood In The Water 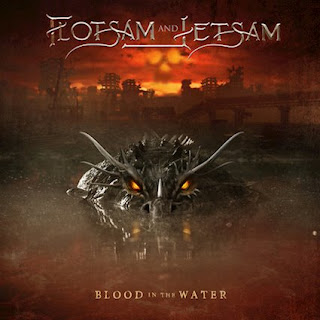 Flotsam and Jetsam are about to unleash a monster of an album on AFM Records, June 4th. This is classic metal meets the modern production soundscape. Just a hell of a ride as you listen to this powerful release. "Blood In the water" is one of their best songs they have ever recorded. Pure power and aggression. Vocalist Eric Knutson unleashes hell with his charge the walls aggressive yet melodic style. 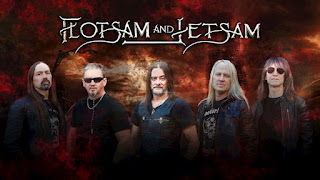 Overall the songs rise through the standard flotsam gambit however there is something new here. There is an almost ethereal atmosphere that surrounds each song. The music is completely off the charts and it envelopes you in a haze of a heavy metal high. You will be singing along with every song. Nothing, not one song will disappoint and that ,in today's one good song releases ,is a breath of fresh air.The band has never sounded more passionate about what they are creating. Anyone who calls themselves a fan of metal must get this album and play it loud. 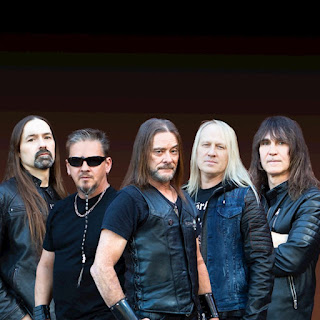 FLOTSAM AND JETSAM have seen many of their peers that started at the same time, including Metallica, Megadeth, Slayer, and Venom have their day in the sun. Considered in metal circles as “legendary,” the mighty FLOTSAM AND JETSAM, over their long career, has seemed somewhat plagued by label snafu’s, changes in trends, or other unfortunate events. On album number fourteen, and without a doubt making the best music of their career, FLOTSAM AND JETSAM finally smells blood in the water this time around.Says singer ERIC “AK” KNUTSON, “We’ve seen our fan base increasing, and we’ve seen the response to the last two albums getting louder and louder. We have some of the most committed and crazy fans in the world. We charted higher on our last album than at any point in our career. Maybe our career path will run similar to Motorhead’s, who although wasalways considered iconic, didn’t really break through in a big way until later in their career. We feel our time is now . . .” says AK. “We’re like that dog that’s been kicked . . . we’re ready to break the door down and take what’s ours.”Judging by their new album, “BLOOD IN THE WATER,” AK is spot on. With twelve tracks that literally shred the listener’s ears and pummels FLOTSAM AND JETSAM’s message into the hearts of the most diehard metal fans, the album must be heard to be believed. The lead-off and title track, “Blood in the Water,” let’s you know right off that these guys aren’t messingaround as the song comes screaming out of the speakers with a frenzied rhythm section and guitars blazing on ten. Then the passionate vocal delivery of AK takes the stage delivering, “They want your soul, seduce you with their lies, selling death, the end of the sublime . . . sinking down into the blackout below, there’s blood in the water!”The album continues to dominate from there, with “Burn The Sky,” the first single from the album, searing it’s way into your brain, followed by “Brace For Impact,” which by the way is a good description of what you’ll need to do when you listen to this album. There are so many stand-out tracks it’s impossible to give a full run down, but suffice it to say there is no filler here, just all killer. “Cry For The Dead” is a heart-wrenching track that speaks to the loss of loved ones, and harkens back to the classic FLOTSAM sound from “Doomsday For The Deceiver.” “The Walls” is a vibrant power metal song that will have you singing the hook for days, and the album ends appropriately with a burner called “Seven Seconds ‘Til The End of the World,” a more progressive track that includes some firsts for FLOTSAM, including an orchestral breakdown.Guitarist MICHAEL GILBERT says, “Following up ‘The End of Chaos’ (Flotsam’s last album) was no easy task. We weren’t really sure what we had left in the tank, as we put so much work, sweat, and blood into that album. As it turns out, we had plenty left to say. With everything that’s happened in the world, the friends we lost this last year, and not being able to perform or tour… you hear all of that in our music. It’s angry, it’s aggressive, and our emotions pour out all over this album.”Perhaps at long last, the injustice that has been part of Flotsam’s existence will finally be washed away. Everyone knows about the band, and the awesome assembly of what is for all intents and purposes an “All Star” lineup. Fronted by one of the most gifted metal singers in music history, (and this really isn’t even open to argument), AK keeps bringing the magic every album and tour, and oddly seems to be getting better and better as time goes on. He’s backed by the incredibly talented, exceptionally brilliant guitar duo of STEVE CONLEY and MICHAEL GILBERT, the powerful, precise and lightning fast engine of drummer KEN K MARY, (whose Hall of Fame resume includes over five million albums sold with artists such as Alice Cooper, House of Lords, and Accept), and the “fresh blood” and extraordinary technical skills and prowess of bassist BILL BODILY.FLOTSAM AND JETSAM have come a long way from the kids that stepped onto the world stage with their first album, 1986’s “Doomsday For The Deceiver,” which received the first (and only) 6K rating in Kerrang! Magazine’s history. But the one thing that has never been in question since that day is their dedication to their fans, their incredible talent, and relentless pursuit to produce their best music ever.FLOTSAM AND JETSAM smells blood in the water. . .

Email ThisBlogThis!Share to TwitterShare to FacebookShare to Pinterest
Labels: metal

Cry Of The Wolf Magazine
We are an online source for heavy metal reviews and interviews. We specialize in fearless metal coverage. The blog started as an extension of my love for heavy metal music. Contacting and speaking with some of the metal worlds legendary performers has been a dream come true for me. I play guitar as well. Performed and recorded with the bands, Witch Meadow, resistance, Gemini Wolves. Witch Meadow can be found on Spotify, you tube, instagram, and other channels

There a handful of rock bands that can pull off a costume persona. GHOST, KISS, GLORYHAMMER, ALICE COOPER come to mind. Few can c...

Cry Of The Wolf Magazine
Rumford, Rhode Island, United States
We are an online source for heavy metal reviews and interviews. We specialize in fearless metal coverage. The blog started as an extension of my love for heavy metal music. Contacting and speaking with some of the metal worlds legendary performers has been a dream come true for me. I play guitar as well. Performed and recorded with the bands, Witch Meadow, resistance, Gemini Wolves. Witch Meadow can be found on Spotify, you tube, instagram, and other channels